Who are they and where did they come from?

Green Anglicans was established when provincial coordinators (Rev Rachel Mash and youth coordinator Ncumisa Magadla) were appointed.  Green Anglicans is a movement that stems from the environmental network of the ACSA and involves the education and spiritual development of becoming an environmental steward. If South Africa was the epicentre, the aftershock of the movement has expanded to central Africa, parts of northern Africa and even Portugal.

If you would like any more information on any of the structures and organisations mentioned, please contact the St Luke’s Parish Environmental Educator – Michelle Rita Hall: (michelleritahall@gmail.com). 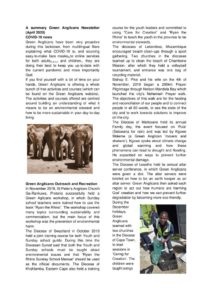