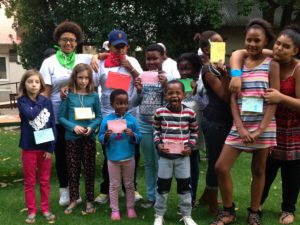 Day one of holiday club started with the usual registration (as well as the other days) of each child and was fun filled with large group activities such as games, worship and arts and craft, Dodge ball and musical statues, we had a few of our holiday clubbers dance for us and compete for a prize but little did they know they were all going to get a prize for participation. This was a good ice breaker for both the children and leaders as they encouraged and danced with the kids if they needed a boost to get out of their shells and to become completely comfortable with the leaders and new or unfamiliar children. We discussed rules with the children and introduced ourselves (the leaders). The total amount of kids on the first day was 20 and by the end of holiday club we had increased to 35 children. We involved the kids when we did the memory verse using the “hat and movement technique” which they all enjoyed because it was very new to them. We used our usual songs for worship on the first day because the children are always more confident when they feel “safe”. Leaders rotated when it came to doing worship and introduced new songs however this only happened on the second and third day.

On day two of holiday club began with a warm welcome from leaders and games on the grass with leaders for those who came earlier than holiday club started. We did some worship and from there the day was explained to the children as to what is going to happen and how it will happen. The leaders performed a skit on Easter and explained to them what exactly Easter is about and why we celebrate it.The children were split into groups according to colours and had to go prepare together with their leaders a group dance and war cry which allowed children to bond more 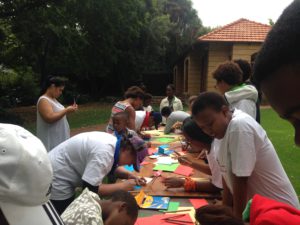 with each other and the one life youth building a relationship with the kids of the church.  After they had presented their tasks they went for lunch and from there gathered in their groups and headed to different stations to go to play games for points and decorate biscuits using icing sugar and sweets. The children then gathered for the memory verse and final song for the day also went home excited for the next day.

On the third and last day not much was focused on Easter but rather a time for the children to enjoy a fun filled day with the leaders and their peers we organised a sprinkler and jumping castle as well as water balloons for the leaders and children to throw at each other. This was even better for the children because they did not see us as leaders but rather more of older fun sisters and brothers to have fun with, another bond built with them and another barrier broken. The children enjoyed the holiday club and 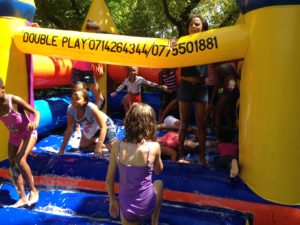 are looking forward to an even better one which was promised by us leaders. Parents were pleased and happy about the holiday club as they got positive feedback from their children.

My personal challenges were not many because I was able to think and fix on the spot my leaders were excellent and their leadership qualities are even better they were good with the children and gave them a platform to be themselves and to develop confidence, motivating them and always making sure the children knew that they noticed their individual successes as well as their group success’s. Cheering them on and showing care. The leaders had a movie date in the youth room after holiday club and reflected as well as congratulating each other on working as a good, solid team.

To sum up this report the holiday club was a success for everybody including the children.